The majority of corporate EP programs still fail to adequately articulate their mission objectives. This is largely due to widespread judgment and risk perception bias, along with direct economic and self-preservation interests of  services providers, training vendors, and industry pundits.

In spite of many years of an evolving discourse around the added value of EP operations, ranging from logistics optimization to travel facilitation, few have had the audacity to openly distance themselves from the attack-prevention focus (“…we are called Executive Protection agents after all!“) and clearly defining the latter as anything other than their core mission. Here is what the 3rd generation EP professional’s mission is defined as, in the corporate context: 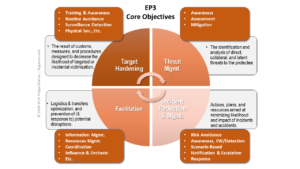 Within this framework, attack-prevention becomes an outcome of an overall target-hardening effort; one that transparently recognizes the actual/statistical likelihood of a targeted physical attack (vs. the anecdotal and fear-driven arguments of the 1st and 2nd generation professionals) along with the realistic success rate of surviving/deterring such an attack.

Sorry, no Tweets were found.